A sister site of www.holacultura.com 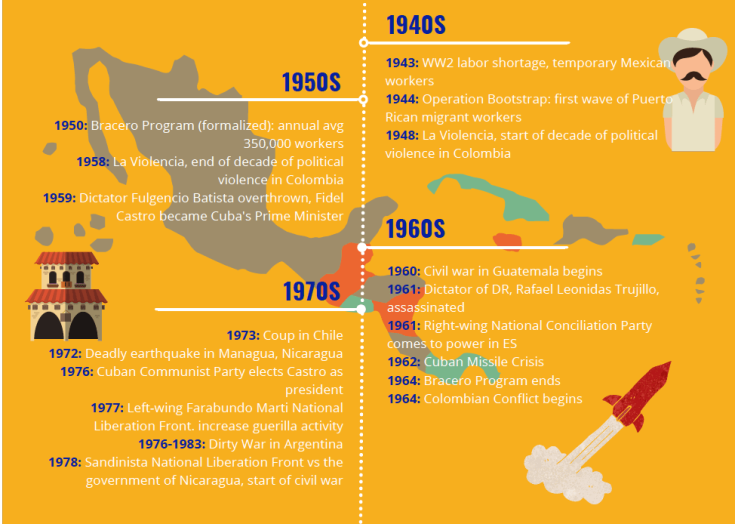 The making of D.C.’s Latino Community

What brought Latin American immigrants to the Washington-area

In the first half of the 20th century, people from Latin American and Caribbean countries began settling in Adams Morgan and adjacent neighborhoods. Many worked at the Hispanic-world embassies once located on 16th Street NW. Hispanic embassy personnel–both professional and blue-collar staff–usually brought along family members and friends, in what experts call chain migration.

But the embassies were only one reason Latin Americans ended up settling here. As the 20th century progressed, refugees fleeing Central and South America and the Caribbean began swelling the ranks of what would come to be called the ‘Latino’ community.

In the 1960s, Cubans fleeing Fidel Castro’s Soviet-backed regime settled in Adams Morgan and other parts of the Washington area. During this same decade, Colombia’s long-running civil conflict began, leading to the deaths of hundreds of thousands of people.

In South America in 1973, General Augusto Pinochet overthrew Salvador Allende, Chile’s democratically-elected president, in a U.S.-backed coup d’état. Chileans who opposed the coupe left the country in large numbers, some settling in Adams Morgan. In Argentina, a so-called Dirty War raged from 1976 to 1983, during which time the country’s military dictatorship was implicated in the disappearance of 30,000 people seen as associated with socialism and left-wing movements. Uruguay and Paraguay had similar state-backed repression at the time.

In the ’80s and the decades prior, Central Americans were also facing political crises. In Nicaragua, from the late 1970s and into the ’80s, the leftist Sandinista Liberation Front fought a civil war and defeated the U.S.-backed government there. By that time, the U.S. government, intent on preventing the spread of communism, already had a long track record of influencing and interfering with Central American countries. The U.S. government, for instance, later admitted the role of the Central Intelligence Agency in the coup d’état in Guatemala in 1954.

In El Salvador, violence and civil strife had plagued the Central American country for much of the 20th century even before a military coup in 1979 led to a U.S.-backed civil war the following year. It is estimated that more than 75,000 people (mostly civilians) were killed, and a quarter of the country’s population fled before the war ended in 1992.

Adams Morgan was the center of Latino life in Washington, D.C.

By the 1980s, Washington’s burgeoning Latino population had grown significantly. According to the 1980 Decennial Census, Hispanics made up 33 percent of all residents of Ward 1, which includes Adams Morgan. Citywide, nearly 18,000 Latinos lived in the District at that time, the equivalent of almost 3% of its population. In 1990, their numbers nearly doubled to about 32,000 individuals, or 5.5% of all residents, according to the census data.

Since the 1930s, the U.S. Census Bureau’s Decennial Census had asked about ethnicity, but it only asked about Mexican descent. It wasn’t until the 1970 census that officials expanded on the question to include some Caribbean countries, Central and South America, and Spain.

Although those changes sought to better capture the country’s diversity, the Census Bureau is often criticized for failing to accurately portray the Latino presence in the United States. To this day, the U.S. Census Bureau is well-known for undercounting Latinos.

In reality, the District’s Latino population may have been larger than the census data indicates for past decades–and even today. That’s why many longtime Latino residents say the true presence and impact of Latinos in the District could be found not in the census figures but at the yearly Latino festivals that first took place in the Adams Morgan and Mount Pleasant neighborhoods.